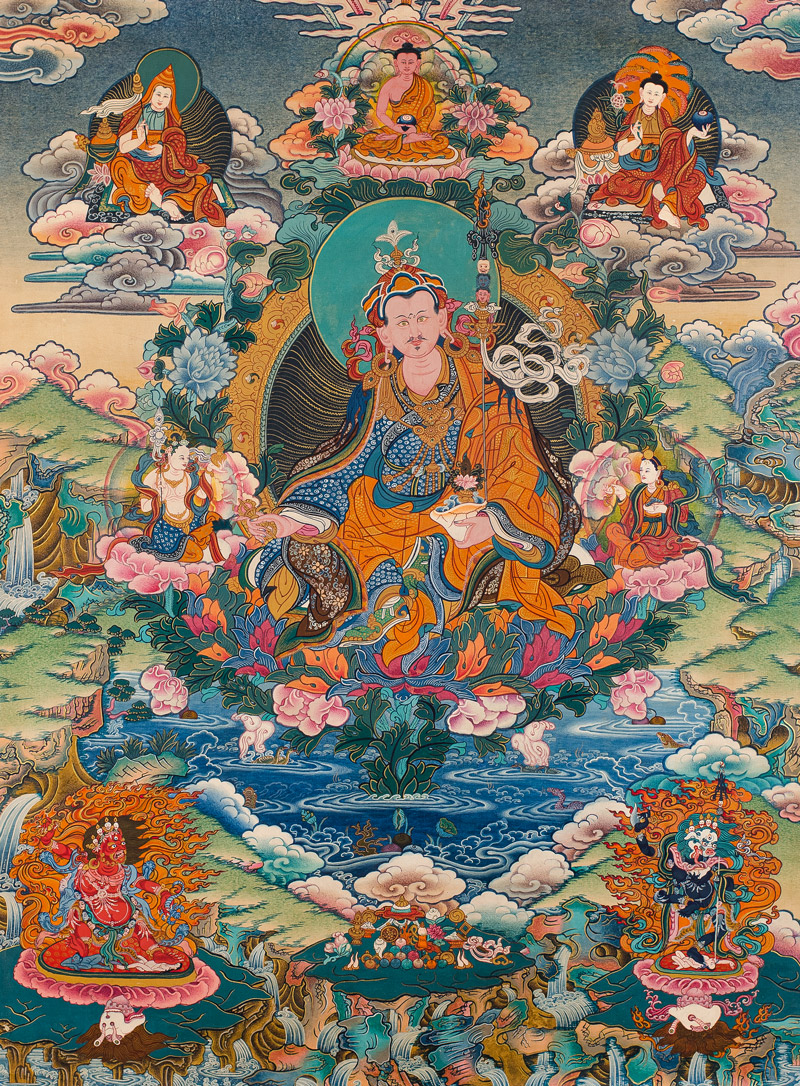 He first appears in Buddhist manuscripts in the early 7th century, described as being one of the most powerful Tantrics in Tibetan history, summoned to Tibet by the King Trisong Detsen to propagate the Buddhist religion in Tibet. It is him that built the Samye Monastery. He is revered in India, Tibet and Nepal as being the master of the Tantras, the fundamental texts in the Vajrayana tradition.

His name Padmasambhava, was given to him as legend has it that he was found as a young child, 8 years of age, in the heart of a lotus on the Dhanakosha lake in the kingdom of Oddiyana (now in the region of Kashmir). His entire existence was recorded in a number of texts that are still being discovered today. The charm of Padmasambhava is due to his spiritually devoted life that filled with miraculous feats accomplished all over the Himalayan region.

Today many of the power places for Buddhist are in locations that Padmasambhava is said to have visited. One of the most famous places is in Bhutan known as the Tiger's Nest where it is said that Padmasambhava meditated for 3 years, 3 months, 3 weeks, 3 days and 3 hours.

His varying imagery and 8 forms can be understood to represent the complex nature of Vajrayana practice. Known as the Guru Rimpoche to most Tibetans he is believed to be present in all spiritual teachers.

Believed to reside in the Glorious Copper Mountain, a thangka that usually represents him in his eight forms surrounded by dakas and dakinis dancing and feasting. Another popular Thangka will display him with his 25 greatest disciples, amongst which you will find the King Trisong Detsen and one of his servants. According to legend he is said to have trusted these disciple with the task of hiding certain sacred texts and treasures that will be discovered by their incarnations at the opportune moment.

Each of his forms correspond to the different episodes of his life that spanned over 200 years according to legend. His eight forms are ; Shakya Sengue, Pema Gyalpo, Padmasambhava, Dorje Drolo,Nyima Oser,Padmakara, Sengue Dradrok, Loden Tchokse.

The form here and its attributes are a symbolic representation of his many accomplishments and powers. Born out of the compassion of Amitabha, who upon seeing suffering of sentient beings emitted a vajra inscribed with the syllable HRIH - which descended onto earth transforming into Padmasambhava. It is at this precise moment that all the Buddhas of the 10 directions and thousands of Dakinis invoked the blessings all Buddhas for the benefits of all beings.

This became known as the 7 verses of the Vajra or The Seven Line Prayer. 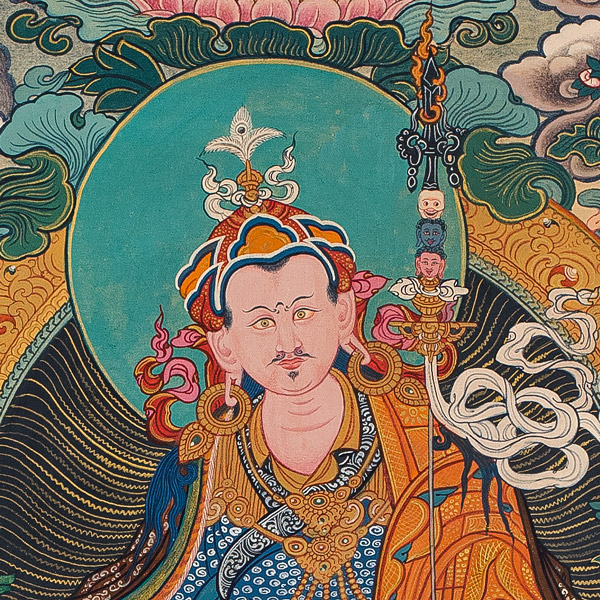 3 FeathersDzogchen, advanced teachings in Nyingmapa tradition
TridentKhatvanga in Sanskrit, sylbolizes the female principle
Right Handholds the Vajra, symbol of his ability to transform the poisons into wisdom, in the mudra that dispels evil.
Left HandIn the mudra of meditation and holds the cup containing the nectar of immortality 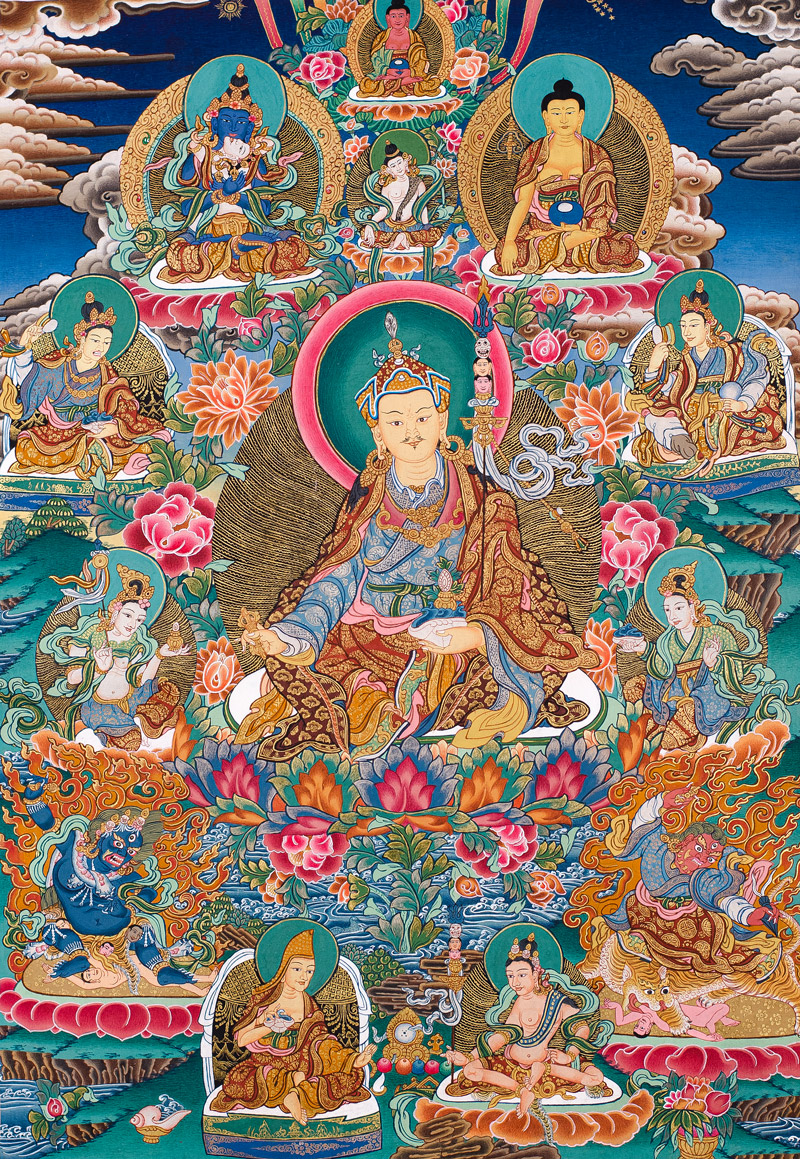 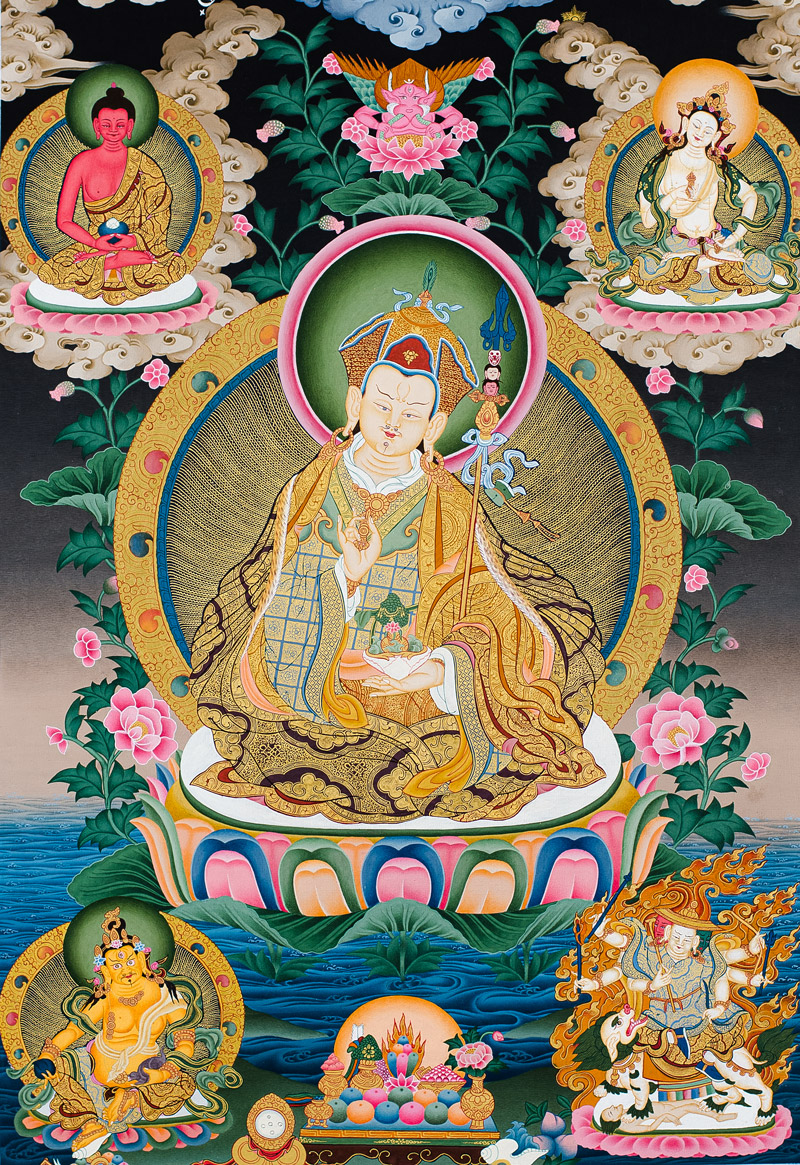 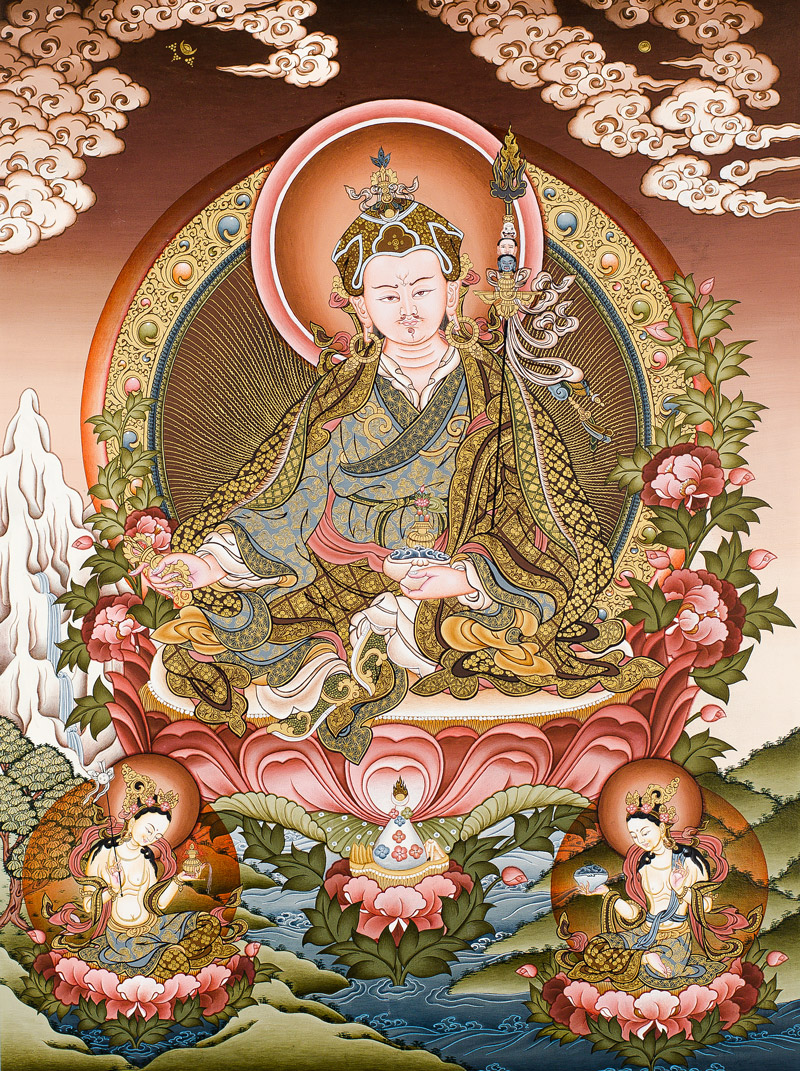 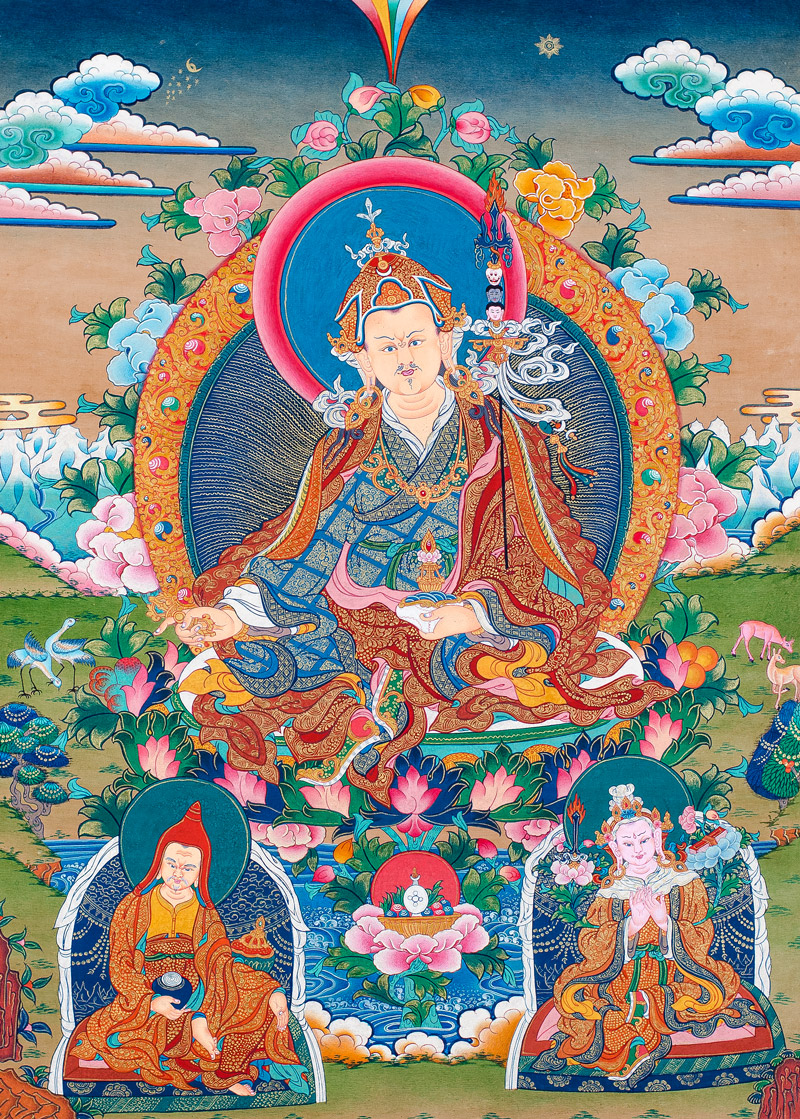 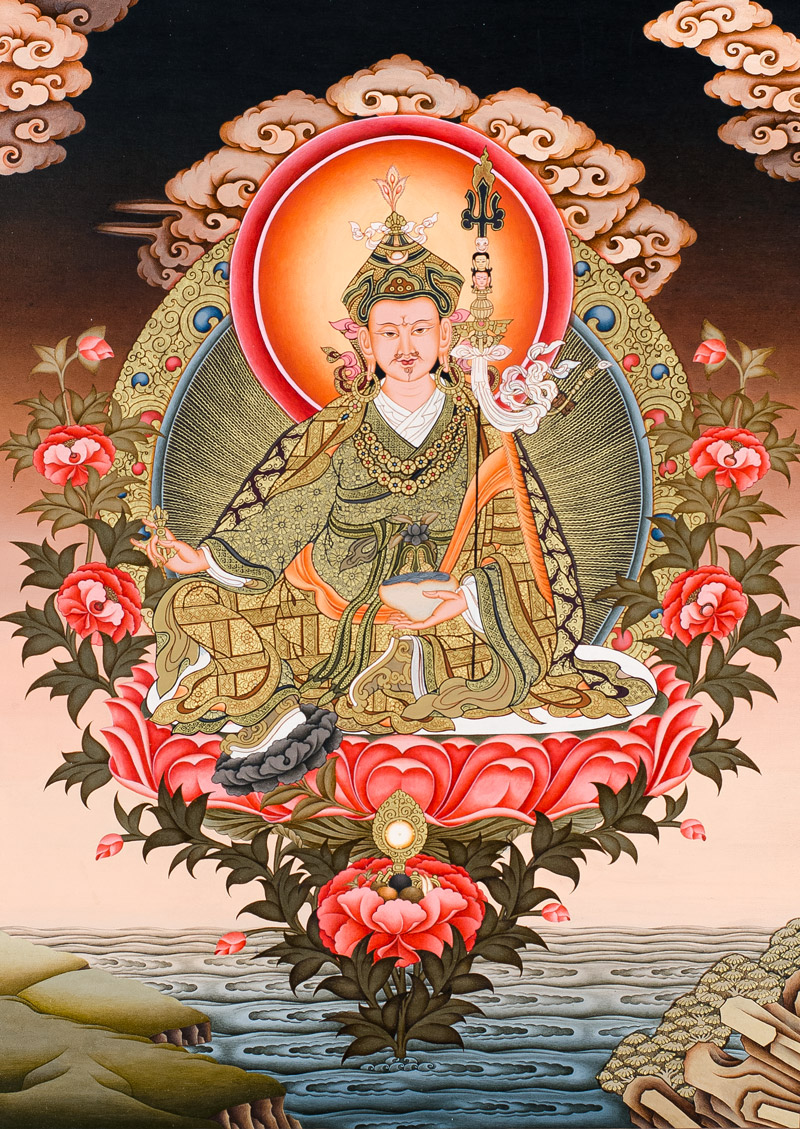