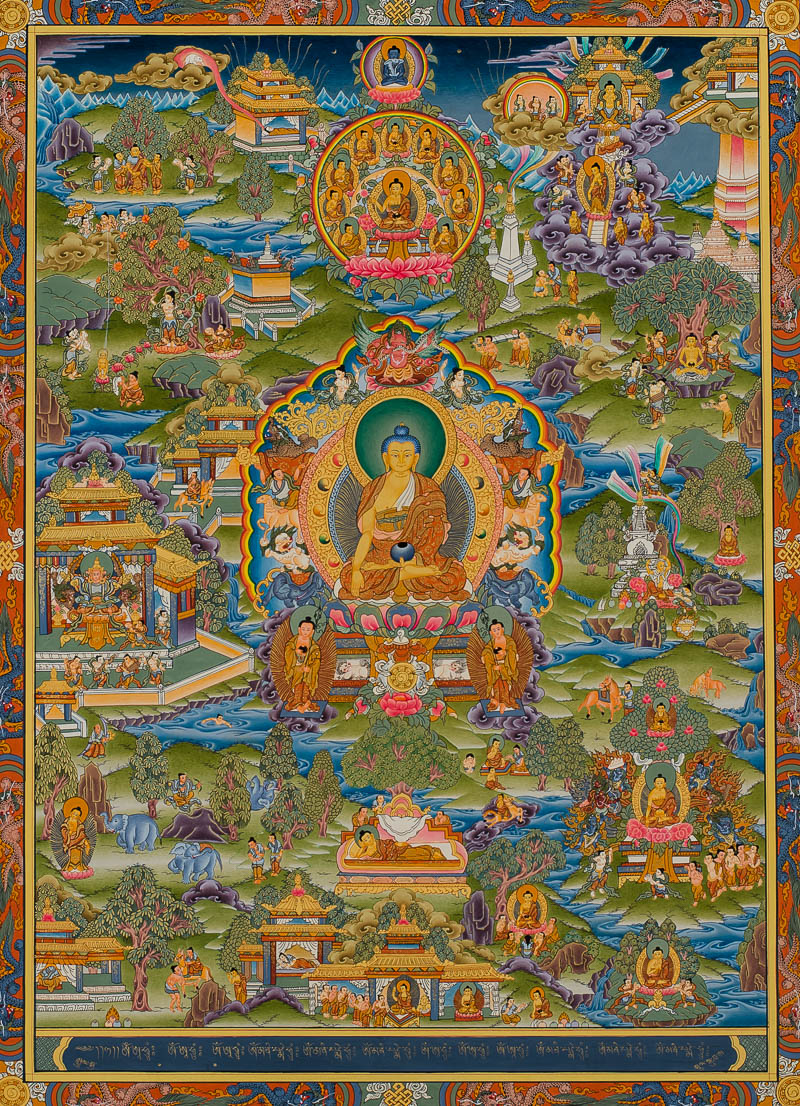 The Story of Buddha

As with all good stories, the Life of Buddha, or as he will come to be known, Shakyamuni Buddha, begins with a prophecy that comes to Maya Devi , queen of Lumbini a kingdom in southern Nepal. This prophecy comes to her in the form of a dream about a white elephant. This event is portrayed in the top left corner of the Thangka.

The next day, the queen goes to the astrologers and is told that this is a great omen. Confused Maya Devi decides to go for a stroll through the woods in the palace grounds. Upon feeling a weight in her armpit she takes hold of a branch, it is at this moment that  Siddhartha Gautama is born. A young boy who can walk, and for each step he takes a lotus flowers under his feet. The middle of the left part of the Thangka show this event..

The boy is brought to his Father and festivities are held in the palace. Maya Devi being infertile this event is a miracle ! The young boy grows and learns languages, mathematics and all the skills to become king. The Kinds astrologers predict that Siddhartha will become a great sage, much to the dismay of his father who wished for a strong descendant for the throne.

The king then decides to keep the boy from seeing the true pain and suffering in the world by keeping inside the castle walls, no sickness, no poverty, no death. But one day day the young prince ventures beyond the walls and there he is confronted with the the misery and suffering of existence. Unable to bear the emotions this creates he decides to abandon his kingly life to seek out a higher truth. Shown on the lower left part of the painting.

And thus begins his life as a wandering ascetic.

As he departs the palace he cuts his long black hair symbol of wealth and royalty. Thus beings his journey to what becomes the middle path. IN his early time as an ascetic he joins a group of Hindu ascetics and with them practices the heavy and enduring penances that are required to live a spiritual life according the Hindu scripture. This would mean long periods of fasting and meditation.

During this period, the Buddha can seen as weak and frail, as in the famous fasting Buddha Thangka and pose top left of the painting you have here. It is during this period that the Buddha comes to conclusion that such extreme penance is not the way to seek the truth he is looking for. And he is rejected by his peers as he begins to live a healthier life, trying to maintain his physical and mental health.Upper left of the painting.

It is at this moment that he enters into a deep meditation at the foot of the now famous Bodhi ficus religiosa tree. As he approaches his awakening he is tested by Mara, with beautiful dancing nymphs, demons with arrows and swords which the Buddha transforms into mist and flowers. Lower right of the Thangka.

Mara then taunts him by saying "Where are your peers, no one is here to witness your moment!" and at this instant the Buddha touches the earth and attains Nirvana. This pose is  called the Bhumi Sparsha mudra or taking the earth as a witness. Pose that uniquely identifies the Buddha Shakyamuni pictured here in the center of the painting.